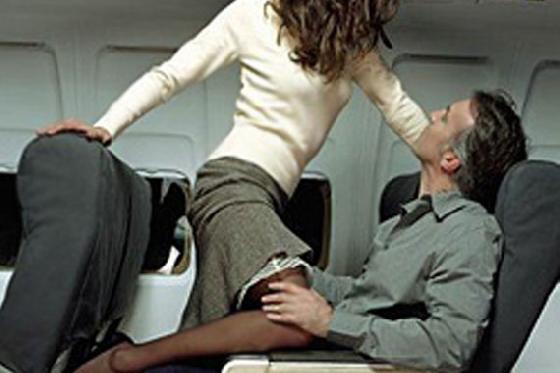 Sex in the aircraft resembles high heels: it is not always easy, not always safe but still very desirable. At least to have something to boast (of sex, of course – not the shoes).

Sigmund Freud said that all great discoveries in the world were made in the name of sex. The theory is, of course, debatable, but there’s a strange coincidence that the first man to make love in the sky, was Lawrence Sperry, the inventor of the autopilot. Sperry won the glory of the sex-pilot in November 1916, when the airplane aboard which he was with his student, crashed. Fortunately, both survived, but the rescuers found them completely naked. This amusing story, which got a lot of publicity, was the subject of many jokes, but at the same time it laid the foundation to the movement Mile High Club.

The Medal “For Courage”

Nowadays, all the airlines strictly enforce safety rules, sex on a plane is available only to the most adventurous: to achieve the goal it is necessary to lull the stewardesses and passengers suffering from paranoia. On the official website one can read the stories about sex in the plane. There are stories collected for the last (!) 14 years, you ‘ll definitely find a lot of interesting stories there! There are also useful descriptions of the main obstacles for sex in an airplane and tips to help you avoid them.

They are constantly staring at the sides and constantly going to the toilet. Seriously, if you look closely, the toilet is almost always occupied in the aircraft, because everyone is bored and drinking a lot.

But if you choose the right flight (for example, across the Atlantic), and if you are patient, sooner or later, even the most active passengers will fall asleep. By the way, it is advisable to prepare for a “special operation” at the airport: when registering, ask the seats closer to the passage, then you won’t have to disturb your sleeping neighbors.

How a Guy Can Improve His Sex Skills

If someone in the plane is not sleeping, try to show you feel a little unwell and ask your partner to take you to the toilet. Do not forget to pretend you feel bad on the way back again, or at least don’t show a satisfied smile.

You can have sex in the airplane without leaving their seats, but only if you are sitting on the back row, flying at night, and flight is barely half full. Otherwise, the risk may be too great: a couple of years ago, two Russian tourists, flying from Brazil to the UK and having oral sex right in the cabin of British Airways, had to pay a thousand dollar fine and agree to be deported to Russia.

Sex in school? No problem, only in sex school

Men can’t be blamed for falling asleep immediately after sex!